Unlock: Students teaching each other 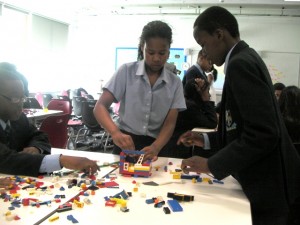 One of our Unlock groups were asked by their Headteacher to deliver a series of training sessions for Year 7 students as part of the school’s Business and Enterprise week. Participants conceptualized, planned and prepared two sessions to be delivered to all Year 7 students in their school.  Half of the Unlock group (14 students) delivered their five repeat 50 minute sessions on teambuilding whilst an OFSTED inspection team were in the school. 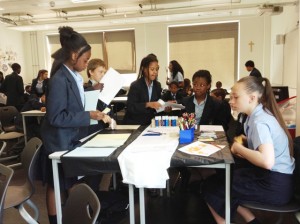 When the school had received the OFSTED call, debate was had as to whether the Unlock group should continue to facilitate their session as planned.  The Head however, never questioned this.  To her, this was an opportunity to demonstrate to OFSTED how much the school trusts and values their students’ abilities and the way in which they promoted student-led learning. Two of the inspectors spent some time in the second session: they were impressed enough that the lead inspector returned to spend time in one of the closing sessions.

The other half of the Unlock group had slightly less pressure as they delivered their sessions after OFSTED had left, but nevertheless they rose to the challenge and facilitated five impressive sessions on pitching and presentation skills.  Feedback from Year 7 students, staff (and OFSTED) was incredibly encouraging and left the group feeling empowered with a sense of belief that they can have a real impact on their school’s community.