Student voice on the TEDx stage

I have always thought that having school students in the audience at a TEDx event, then giving them the stage to report back to the local audience on what they thought should be changed would be a good idea.  However, given that TEDx speakers (limited to 18 minutes on stage) spend a huge amount of time perfecting those talks – and it shows – the question was whether ‘ill prepared’ students would undermine the hard work and planning of the other speakers.   Now, I have hosted over 20 TEDx ‘conferences’ in 5 countries and coached a mass of speakers to help them develop great talks.  So, I thought, let’s accelerate all of this and see if we can unlock the real thoughts which students have.  If we can help students distil everything into the real punchy elements, then their presentations would have real impact. And if they collected their thoughts during and in between the other TEDx talks, they could also be immediately relevant.   In other words, present back your ideas based on what you have just heard.  No time for long preparations.

So the plan was:
Day 1: First few hours: get students to the point that the trust me, are interested and enthused, and can see roughly what they would be doing and then they (the students) would jump to the phones and mails and persuade their parents to let them spend the rest of the day (and the next day, a saturday) on TEDx.
Remainder of the day: work with whoever wanted to continue, and was successful in persuading parents.  WE hoped that 10 or so would continue and I would help them develop their own styles in presenting material (the next day would be to find what to say!)
Day 2: Students would attend TEDX and at each of the breaks we would work together for fifteen minutes to identify topics which students would want to speak about (relevant to them and the audience) and would work through the logistics.  The idea was that there would be no more than 3 students on stage.

Actually what heppened:
Many people had reservations over this.  Last thursday I landed in Klagenfurt and went straight to talk to some local school heads – meetings having been arranged by the wonderful TEDx team there.  Heads were ‘enthusiastic’ but with some concerns as most had never really heard of TEDx, and had little idea that an amazing group of people were coming to their town to speak on the TEDx stage.  The pitch to the heads was that the TEDx concept would enthuse students (remember, I was speaking to them in English, they did not know me and I did not know anything about their schools) sufficiently that they would want to reschedule the rest of their weekend to take the challenge.   On Friday I worked with about 100 15yr old Austrian students from local schools in the Messe Halle (the venue being set up for TEDx) for just 4 hours until school closing time, then 20 of them persuaded their parents to continue for the rest of the day and for the next day (saturday) also.  By 15:00 I could see that the students were ready to give a great talk, but we had no idea as to what the content would be (how could we: the TEDx was the next day).

At 16:00 20 students pitched to the TEDx organiser, and got free tickets for TEDx.

On Saturday, those 20 listened to the amazing speakers on the TEDx stage: at each break we took 15 minutes to work through key points. They worked through content and style, they planned a series of talks, making 13 minutes in total. By 16:00 students had identified some great talks: and worked through who would be best to present – they rehearsed and planned.  At 17:00 nine self selected students took to the stage in front of 500 people. “Why real talent in school goes wasted”, “how to get shops to stop selling things in plastic”, “let’s make our school interesting” (and they were given the stage backdrop later), “Hints to make your internet and phone use private” and “why we need more arts in schools”

Two standing ovations, real connectivity. Just shows: students have real insights and want to make positive change. We need to Unlock them!  Students are good at this if given the chance! 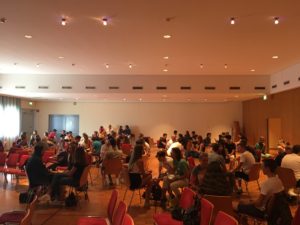 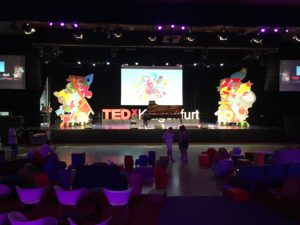 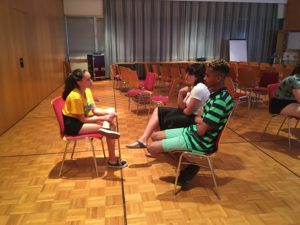 End Day 1: students coaching each other 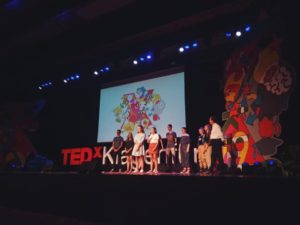