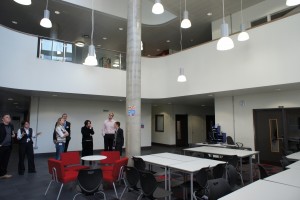 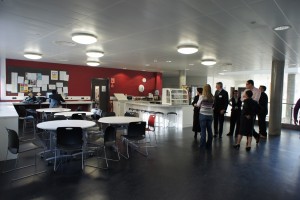 This client is a new PFI school, with whom we have had a long relationship (including helping them, a sample school, and the Authority procure their BSF partner).  As is so often the case, the illustrations and fly-throughs of the Internet Cafe and library were somewhat different from what was actually delivered,

Unlike many others, we (that is, the Head and us) decided that what was delivered was not good enough.  After consulting the PFI concession holder, we agreed that we would replace furniture (nothing fixed to the structure) and enhance the cafe and the library spaces.  The PFI operator was concerned, but realised that there was little they could do to oppose other than insist that they undertook any fitting of new lights.

Our method was to create a design brief for both areas.  For the cafe, the need was to increase the number of seats, make it more like the sort of cafes which people expect in 2012 – and the library, based in the atrium, was somewhat lacking in any form of ambience and purposefulness.  Shelves didn’t hold sufficient weight, were difficult to browse and, frankly, looked cheap; tables and seats were uncomfortable. 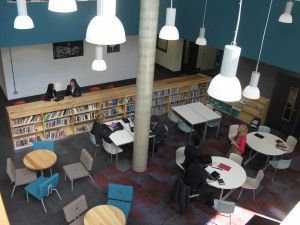 From our design brief we introduced a selected number of organisations who had proven experience of working in restaurants and cafes and had had experience of making bespoke furniture.  As before, ‘best of best’.

A short design process led to the appointment of a fitout design/build contractor within three weeks.  The total refit was undertaken within fourteen weeks of us first getting the go-ahead and the results have transformed both spaces. A previously forlorn and disused cafe is now one of the most popular: staff have taken to eating there, holding impromptu meetings and are often found in discussion or working, and the number of seats increased from 20 to 65.  Tables seat from 15 to 30 people allowing breakout sessions to migrate there.  In the case of the library, bespoke shelving allowed for a dramatic increase in books stored, and allowed for students to learn with their technologies.  Seating has increased by 50%.

We wonder why this level of care could not find itself into the PFI delivery process.

Along the way, we improved the existing (PFI owned) counters and desks and recovered soft furniture

We love doing this.  The school was disappointed with the PFI solution: the PFI operator stuck to their contract and demonstrated how their cafe and library were compliant (knowing neither was working well).  In the end, the school went ahead with us, anyway.  A solution was found.  And an inexpensive one, too. 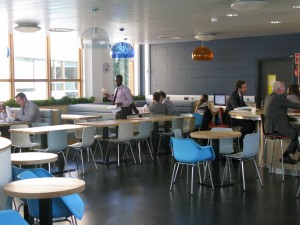 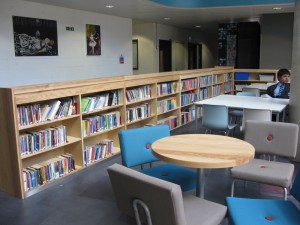 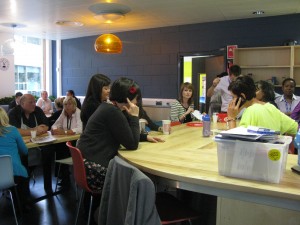