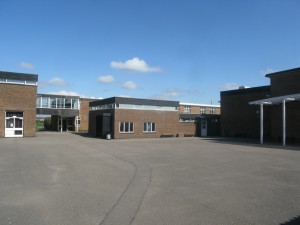 We first met this client after we were asked to deliver the keynote at their speech day.  Some months afterwards this secondary school in Hertfordshire asked whether we would be able to help re-fit their sixth form centre.  The top left picture shows the building, the picture on the right shows how it used to look inside.  Sixth formers used the building for self directed study, and also visited the sixth form office for assistance and guidance.

Together with a sample of sixth formers we created a design brief: the need was to i 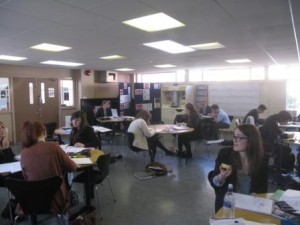 ncrease the actual amounts of seating and working areas, create an environment more conducive to study and at the same time not be too formal.  Members of the sixth form leadership team also wanted a ‘nicer’ office and all wanted a meeting room.  Actually everybody wanted to break from the ‘school’ feel.

And it had to be done within ten weeks of first briefing.

We invited a pre-selected group of fitout companies to an information evening where staff and students showed what they had, then selected the winning team after a two week design competition.   As always, sixth formers viewed the various pitches (when else do they get that experience?) and were members of the decision making group. 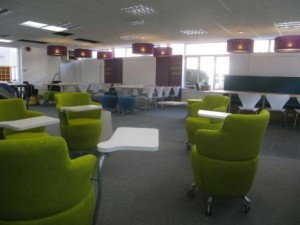 The result is as shown on the final picture: all love the space.  It was delivered on time, exactly to budget, increased capacity by 200% yet gave the feel all wanted.  The cost was roughly 75% of what had originally been expected.