Narrowing the Gender Gap in Engineering

Recently, we met Christina Balan, she’s the Hungarian engineer, living in Seattle, who developed the electrics for the batteries powering the TESLA and most other electric cars. We asked her if she has to prove herself as equal to her male colleagues, she answered: “every day!” 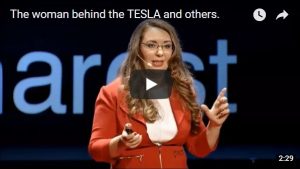 If we look into engineering in our own country, we’ll find the industry contributes 26% of the UK’s GDP. With such demand, it’s no wonder that there was an increase of 5% in applicants to HE engineering courses in 2015/16. In July to September 2017, graduates that had an undergraduate degree in medicine and engineering were the most likely to be employed and had the highest gross annual pay. And yet only 11% of our engineering workforce is female, an embarrassingly low figure compared to Cyprus’ 30%. Despite this, an Atkins survey carried out in 2017 of 300 female engineers showed 84% were either happy or extremely happy in their career. The survey also showed that 91% accredited inspirational teachers as sparking their interest in their field. Knowing one or more engineers was shown as frequently important.

If we’re to increase the number of female engineers we have, it’s clear we need to inspire our young people. Whilst there are thousands of inspirational teachers in our schools, the stats show we can’t rely solely on them to spark girls’ interests. And what about those who don’t know any engineers?  We try to tackle some of this through our Unlock programme by introducing students to inspirational people from across a range of industries, but as much as we’d love to, we can’t work with every student in the country.

Gender and pay inequality is such a hot topic at the moment. Whilst the press coverage and claims against employers are forcing employers to conform to the Equal Pay Act (something which was introduced 48 years ago), it’s clear we have a lot to do to tackle gender stereotypes in order to inspire more girls to aspire to enter industries which are traditionally dominated by men.  We’ve posted a short précis of Christina talking about the battles she faces on our YouTube channel, Inspiring Resources. Hopefully, if female students access resources like this, they’ll go some way in starting to narrow the gender gap in industries like engineering.